OSL or “Open Shading Language” is, as the name suggests, a programming language to write shaders. The language itself is generally platform and renderer independent. In theory, any shader should be usable in any renderer (that supports osl) on any platform.

For this article, I will be talking about a recent production in 3dsMax using VRay. However, any (CPU) renderer, be it Corona or Arnold or even Scanline could have been used with the same system described below. Since 3dsMax is managing the osl evaluation, any renderer able to use 3dsmax textures can use the OSL system. OSL as a language supports both shaders and textures, but, for the time being, 3dsMax only supports textures. Also, note that several GPU renderer developers are working on supporting OSL.

People tend to see OSL as a “magic shader dev kit” that only really makes sense if you need one map that solves a specific problem, like the famous window interior fake from Julius Ihle https://julius-ihle.de/?p=2451 or my OSL adaption of Parallax Occlusion Mapping: Parallax Occlusion Mapping Shader . This can be, without a doubt, very useful and being able to write custom textures is one of the major advantages of OSL. However, OSL can also be used to build a custom shading system that can overcome the limitations of your DCC or Renderer.

Some of you may have seen my previous shading system, discussed in this article: https://www.ronenbekerman.com/timeride-vr-experience/#TexturingShading_shading_system . The following is a vastly improved replacement of this system based on OSL. “Schumann VR” https://www.schumannvr.com required a redesign of the old system to make it more versatile and overall improve the quality.

Requirements on the system:

Before we get into the details on how this can be achieved, let’s look at a demo of the finished system:

So how does this work?

The window on the left in the video above is just a maxscript management tool. The interesting part happens in the materials. Let’s have a look at one of them. 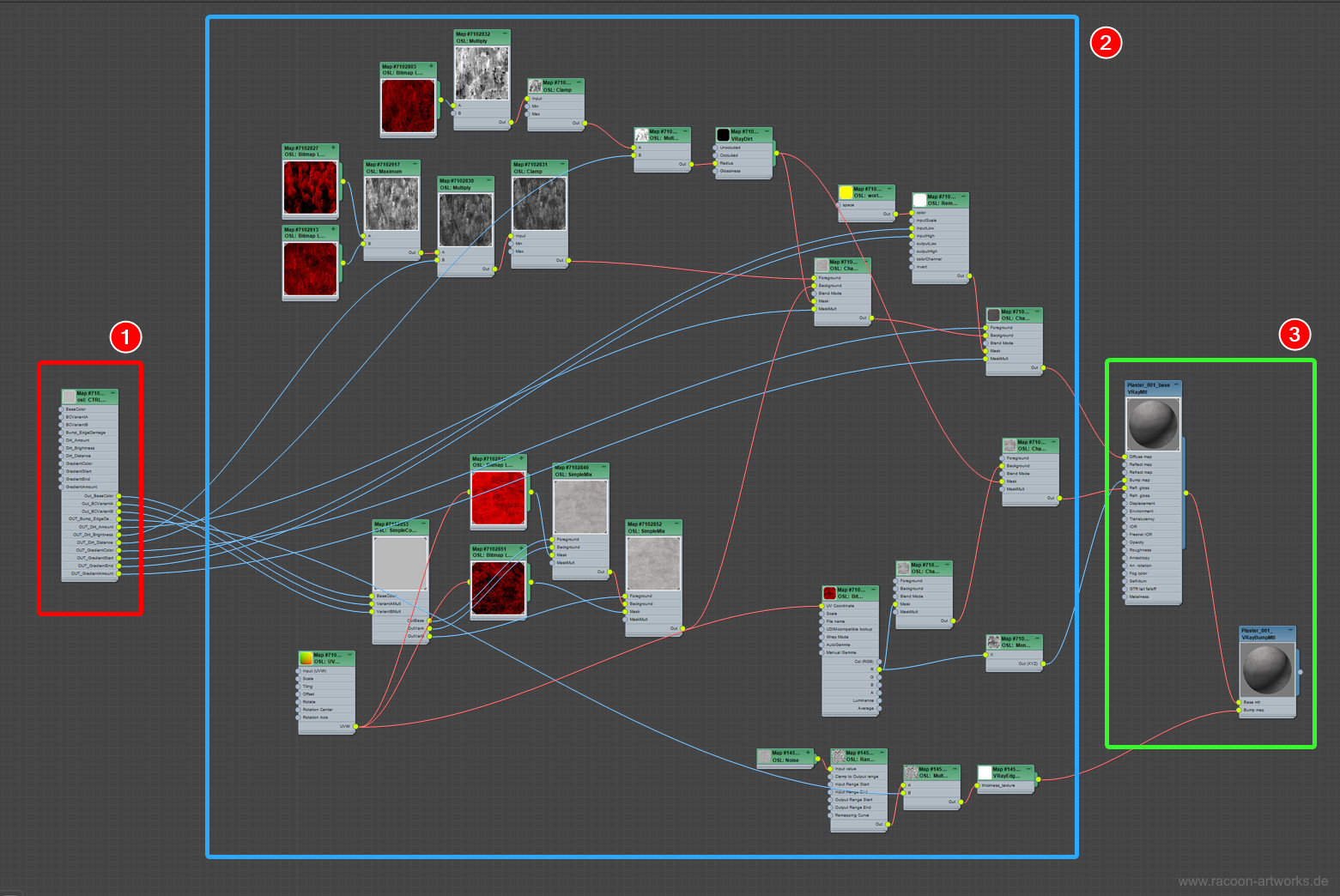 1) The heart of the system, the control object. Any parameters the user can change are defined in this one node. We’ll get deeper into this below. Any connections going off the node control one or several other parameters somewhere in the graph.

2) The logic part of the material. This is basically like any other material in 3dsmax, just made entirely out of OSL maps (In this case I used a VRayDirt map instead of my osl replacement due to time constraints and some initial trace set difficulties. However it’s possible to do this entirely in OSL).

3) The Vray Materials(s). In this case, it’s a standard VrayMtl plus a VRayBumpMtl for additional edge damage. These could be replaced by any other material for a different renderer.


With that out of the way, let’s have a closer look at the control object. 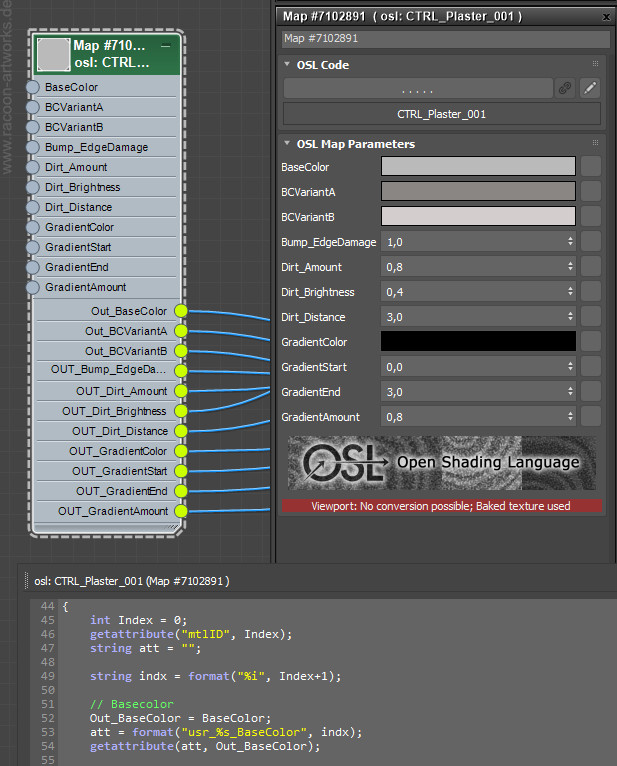 The control object is also an OSL map that is basically just an interface for the user. The default settings are directly defined on the node, as seen below. The interesting part, however, is happening under the hood. We don’t want the user to change any parameters directly on the material, that would break our requirement of keeping every material an instance. What we want to do do is specifying the settings per object and material ID. How are we going to do that? With user properties. Many renderers are already supporting user properties natively and have their own maps for reading them. With user properties, you can store data directly on the object. For example, you can store the diffuse colors for a bunch of teapots directly on each object and read it out in the shader. Each teapot will have a different diffuse color that is defined in that user property despite all sharing the identical shader. 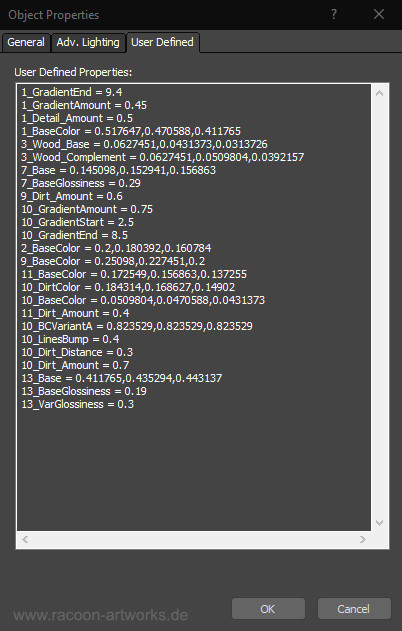 The OSL control object then queries the user property for the current material ID that is being shaded and sets the material settings accordingly.

Granted, you need a little management script for assigning the materials and comfortably reading and writing the object properties but the heavy lifting is done by OSL.


Let’s recap, what are the advantages of this system?


The Good, the Bad, and the Ugly

That’s all fine but is it worth switching to OSL based shaders just because of that? What if you don’t need that functionality? What are the pros and cons of OSL in more moderate circumstances?

The Bad and the Ugly:

Ok, so we got a fancy system using lots of OSL maps and custom maxscript tools. What about more day-to-day practical functionality? Most of the OSL maps I used in my shading system are extremely simple; Mixing, multiplying, clamping, remapping ranges, that sort of stuff – just sometimes combined into more high-level nodes that make the graphs smaller and easier to maintain.

Here are some examples of how to extend your shading capabilities with simple shaders.

1) Manipulating UVWs. Easy and extremely useful. You don’t have to know any OSL to make use of it. This is a quick and dirty example that goes a little beyond (requires writing one line of code) but you can do a lot with the OSL maps that already ship with max. 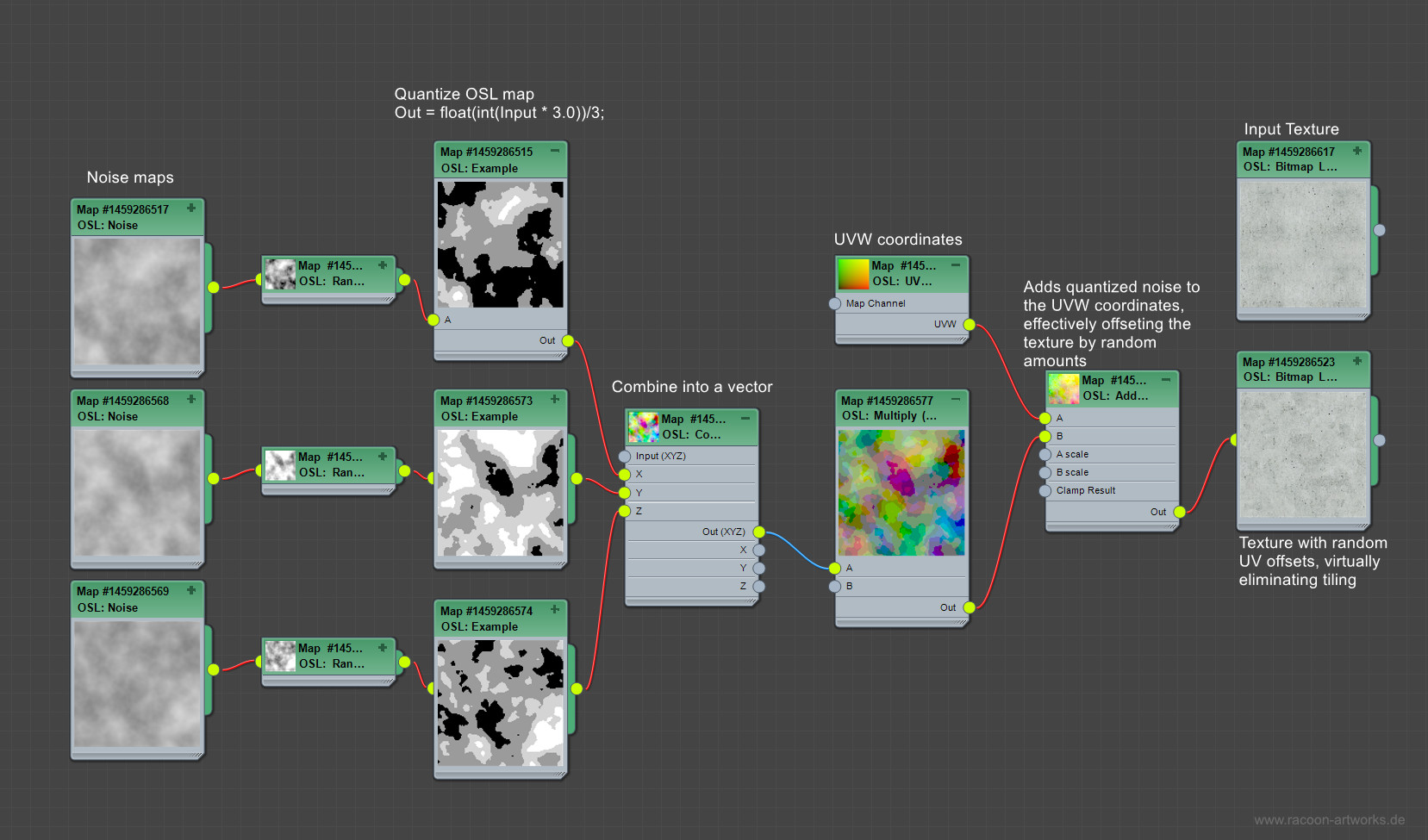 
2) A simple way of creating gradients in object or world space. This can, of course, be done with native VRay nodes but it’s super easy to just modify the existing remap osl shader and make your own specialized one-node version with mappable parameters. 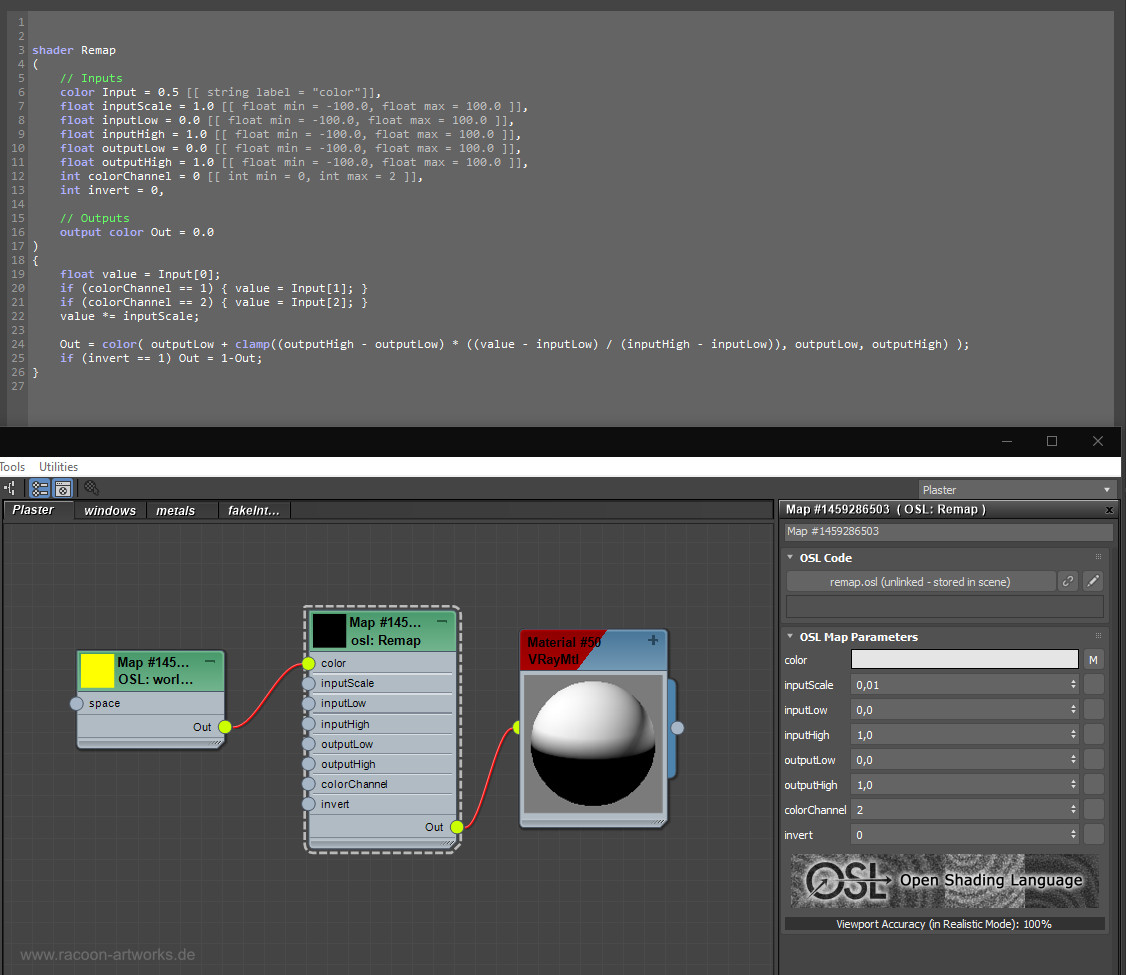 
3) Want to make your own heightblend node like the one in Substance Designer? OSL will save you the ugly mess of doing it with standard VRay maps.

While OSL can not solve all the shortcomings of shading in 3dsmax, it can be a tremendous help and enable more powerful workflows without having to be a full-time programmer. Little snippets of code can already make a huge difference.